I work on 57th St & Broadway, and there are not a lot of great street food vendors around here.  Carnegie John’s and Jamaican Dutchy are the best, and then there’s the rest.  For great street food I either go over to 6th Ave or Park Ave, and when I go to Park Ave, it’s via the E train on 53rd St.

As I was heading there today, I saw a new cart with a big DOSA sign on the side.  It was on Broadway between 52nd & 53rd St, right across from the Ed Sullivan Theater where they tape the Late Show.  This was certainly a promising development.  I’m usually not much for vegetarian food, but I do like spicy food.  The NY Dosa Cart by Washington Square Park won the top Vendy Award back in 2007, and I’ve certainly enjoyed Thiru’s spicy dosas.

Today’s Lunch is the mysore masala dosa ($5) from the new Sami Dosa Cart.  Here’s their menu.  Click through to find out how lunch was. 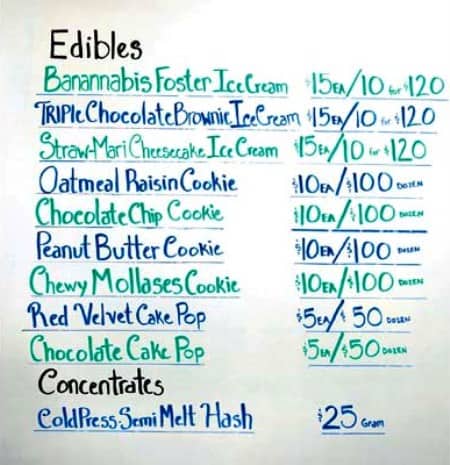 Sami is very friendly, but his English wasn’t too good, and it was tough to communicate.  I did get a few things from him though:

The Sami Dosa Cart menu has dosa, uttapam, biryani and a few other things.  I ordered the mysore masala dosa, which is a spicier version of the masala dosa.

He poured the batter made from lentils onto the grill and made a huge thin pancake, similar to a crepe.  There were spices in the dosa, especially red chili powder, which you can easily see in the photo above.  He then added spiced potatoes with onions as a filling, as well as a spicy chutney paste, folded it up, and cut it into 5 pieces.  There were also 2 small containers that he put in the bag.

The first container was sambar, an Indian vegetable-type soup with carrots, onions, bay leaves and other spices.  The other container was a spicy, creamy coconut sauce that was thick on the bottom and more liquidy on top.  I could not understand what he called it.

I took a couple of bites and what I tasted was a slightly-spiced potato inside a thin, spicier chili and lentil wrapper.  There was a few onions in the filling too.  The potato filling didn’t have a lot of taste to it other than potato, but inside the spicy dosa wrapper it was pretty good.  Potato has a way of absorbing lots of spices before it gives any back.

The wrap itself was pliable but slightly crisp, and it got firmer over the 15 minutes it took to eat lunch, which I thought was a bit strange.  Wrappers like tortillas usually get softer as a meal progresses, but the dosa wrapper got firmer.

The coconut cream sauce had an odd ability to cool things off, while simultaneously making them a little spicier, and I really liked it.  Creamy and spicy are a good combo.

The sambar was decent as a side dish, but it will never be my favorite part of an Indian meal.

The dosa stayed together just fine, but my fingers did get a little messy from oil on the bottom of the dosa.  He probably could have used a little less oil.

Today’s Lunch gets a 7.5 out of 10.  The mysore masala dosa was tasty, but the potato filling didn’t have much flavor, and the dosa was oily on the bottom.  I liked the coconut cream sauce though, and the dosa wrapper itself was nice, as was the spicy chutney paste inside.

While the Sami Dosa Cart doesn’t rise to the level of the NY Dosa Cart, few vendors do – plus it’s only his first week.  Let’s give him some time, and try some other dishes before passing judgment.  In the meantime, we are going to put the Sami Dosa Cart on the NYSF directory and map.  It’s different enough and good enough to be a NYSF Suggested Vendor.

Discover The Savouring Food of Ladakh, up in the Himalayas

5 Best Plant Based Foods & Snacks You Should Try

4 Wine Tours in Upstate NY Worth Your Time

Missing The Grill This Winter? You Don’t Need To Barbecue To...

A Short Guide to Street Food in Dubai