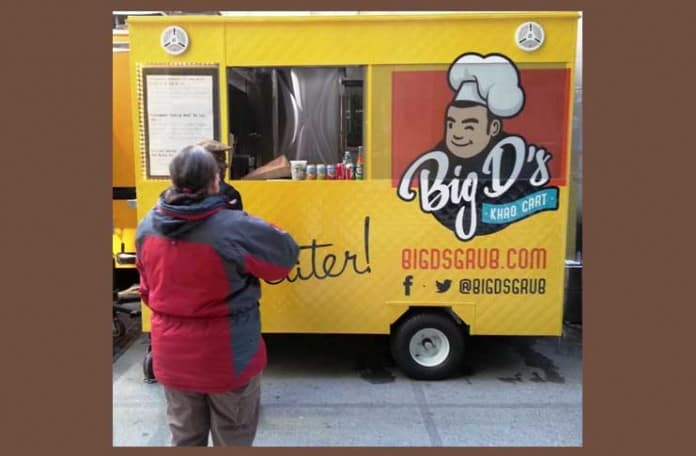 Dennis (Big D) has been telling us for a while about his concept for a new street food vendor that’s different from Big D’s Grub Truck. His food truck sells a fusion of Korean and Mexican cuisine, such as bulgogi tacos.

Big D’s Khao Cart finally arrived on the street recently, and of course we had to stop by.

Khao means rice in Thai, and Dennis told us he want to rotate the menu on a regular basis, making stops around different parts of Asia with rice bowls from various countries (Thai, Vietnamese, Chinese, Japanese, etc). The first menu is here, and we’ve seen another menu since then.

First stop for Big D’s Khao Cart was Vietnam, with chicken, beef and pork options. Sorry, no veggie options yet. Maybe at the next stop on the Asian tour.

We’ve had a lot of chicken lately, and went for the beef this time. The chicken and pork lunches were $9 each, and beef was $10.

After picking up lunch, we had to take the train two stops back to our office. Apologies to whoever was in the subway with me. The smell of delicious grilled beef permeated the car.

Opening the container, the dish came with two light sauces. One was on the sweeter side and one was one the more vinegary side, but neither was too strong. They were meant as complements to the meat, not to overpower it.

Speaking of meat, the beef was cut into bite-sized cubes, which was very much appreciated. Eating with plastic forks is one thing. Messing around with plastic knives trying to cut meat on a bench is something else entirely.

The beef was still quite juicy, and one side of each cube had those delicious grill marks. There was a little char mixed in with the meat too.

We wouldn’t say the beef had strong Vietnamese flavors, but the sauces added some of those flavors. The steak cubes were lightly marinated, but mostly they tasted like grilled beef, which is a great thing when done right, like here.

The jasmine rice was sticky (as it was meant to be) and had a nice flavor by itself. It was even better after the beef, juices and sauces had soaked in.

Looking forward to seeing where Big D’s Khao Cart goes next for inspiration.