Ever had a split pea soup with ham? Well, we took the day off work yesterday to get some things done around the house. At lunchtime, we headed out to see who was around the neighborhood, and wouldn’t you know it, there was a new cart on Varick and Vandam called The Steel Cart.

The logo is a beautiful chef’s knife, and the menu was hearty Euro-American fare. Our expectations were pretty high looking at this menu.

Wanting to try more than one item, and needing to bring lunch home for my wife too, we went for the Brown Cow for $8 and a Split Pea with Ham soup for $6.  You can add a mini-soup to any sandwich for $3.50, but splitting a large soup and sandwich worked out right for us.

Split pea soup with ham is my wife’s favorite soup, so we started with the Brown Cow sandwich and let her start with the soup.

From the first bite, there was a burst of several different flavors in this sandwich. Gorgonzola cheese was the most apparent, but there was also a dijon aioli sauce making itself known.

Both gorgonzola and dijon aioli go well with roast beef, but that wasn’t all. There were also caramelized onions, and the bread was lightly toasted. This was definitely one of the tastier sandwiches we’ve had recently.

Our only complaint was there could have been more roast beef on the sandwich. Being a New Yorker, we’re used to big, fat sandwiches. This one was a little light on the roast beef, but it was heavy on taste. 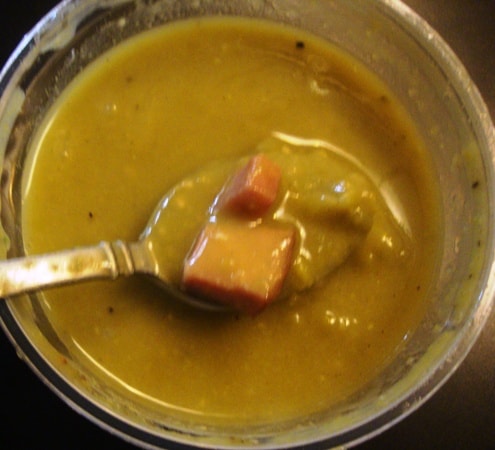 As you can see, by the time we got to try the split pea soup, it was already down a few notches, but there was still plenty left. This was a full pint of soup, and could probably be lunch for lots of people by itself.

Even well into the soup, there were still chunks of ham around. These were pieces of baked ham, not thin, wimpy deli ham slices.

The split pea soup was nice and thick, and there were a lot of split peas on the bottom of the container. They even asked if we wanted fresh black pepper ground into the soup. You can see we said yes.

At this point, The Steel Cart seems to split its time between 70 Jay St in Dumbo and the NW corner of Varick & Vandam in Manhattan. We asked Luke if they would be going to midtown and other areas, and he said they probably would be at some point.

We certainly hope they come up to midtown because we don’t want to have to take another day off just to try their Bourgeois Pig.