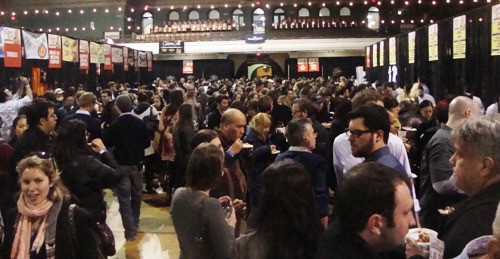 It was starting to get pretty busy at Choice Eats, so after a short break, I got back to some serious food tasting.  For Part I of my Choice Eats experience, click here. 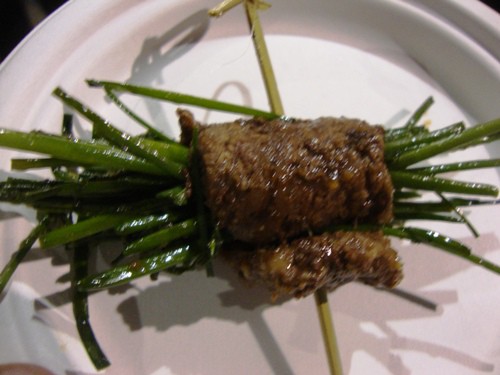 The next dish I tried was beef belly rolled around chives from Takashi.  I live only a few blocks from Takashi in the West Village, but haven’t tried it because my family isn’t big on organ meats.  You try getting teenagers to eat beef hearts and stomachs.  Ain’t gonna happen!  This was pretty tasty, although I did have a hard time getting the picture of a cow’s stomach out of my mind.  Guess I’m not big on organ meats either. 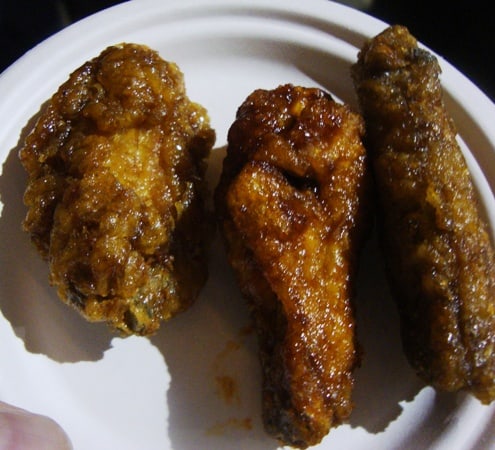 To get back to something a little more normal for me, I stopped at the Kyochon table for Korean bbq wings. They had 3 kinds – soy/ginger, honey and spicy.  I took one of each.  This was more up my alley.  The honey and soy ginger wings were really tasty.  I probably liked the honey a little better, but they were both good.  The spicy wing was good, but really hot, so I ended up on the Stella Artois line right next to Kyochon for more beer. 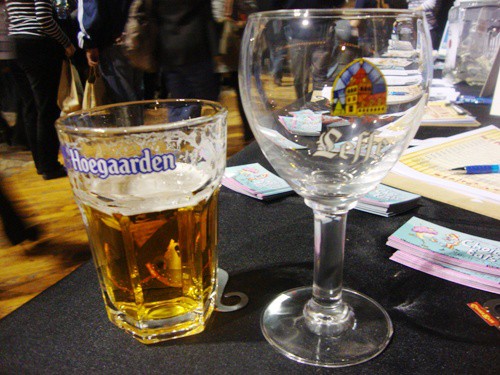 Most of the beer and wine vendors didn’t have a line, but Stella Artois did because they were giving away these beautiful glasses with each beer.  They had Stella Artois, Hoegaarden and Leffe on tap, and I got a Leffe.  They were nice enough to let me have two glasses to bring home. 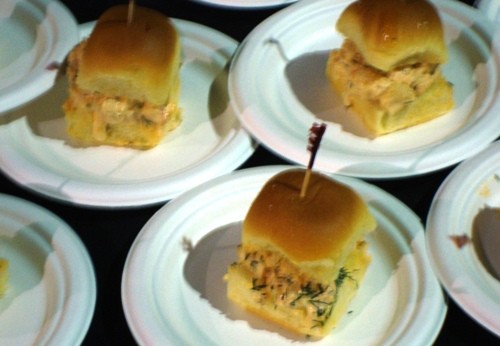 Now that I was cooled off, I decided to get a rock shrimp slider from Juliette, a French bistro in Williamsburg.  These were delicious, with shrimp, sriracha mayo, celery and dill.  The dill was a nice touch, and this was another of the more memorable dishes. 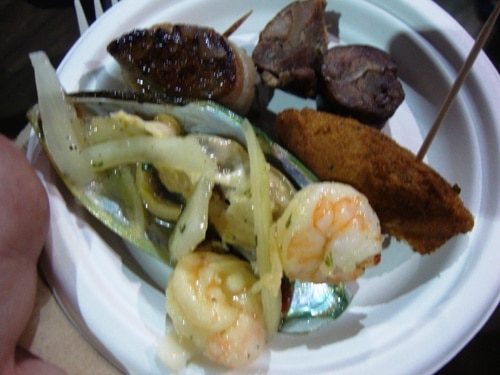 For my next taste, I ended up at O Lavrador, an Iberian restaurant in Jamaica, Queens. The chef was cooking a homemade sausage over flames, which attracted a bit of attention. Another chef sauteed beef tenderloin with bacon wrapped around it. They also had cod fritters and ceviche.  This was definitely one of the more ambitious plates around, and it was all very good, although I don’t expect to be going to Jamaica for dinner any time soon. 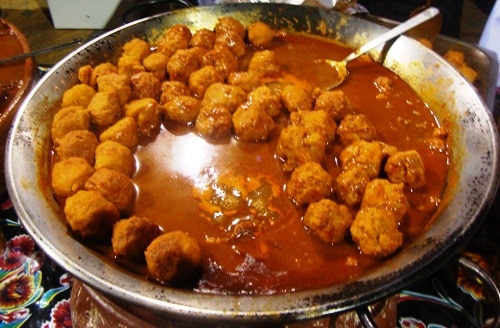 Next up I went to the table of another restaurant located in the West Village, Ofrenda.  They specialize in Mexican home cooking, and had a giant bowl of shrimp balls in a light red sauce.  These were really tasty.  I didn’t realize Ofrenda has been open close to 1.5 years.  It’s near where I live, so I’ll have to get over there soon. 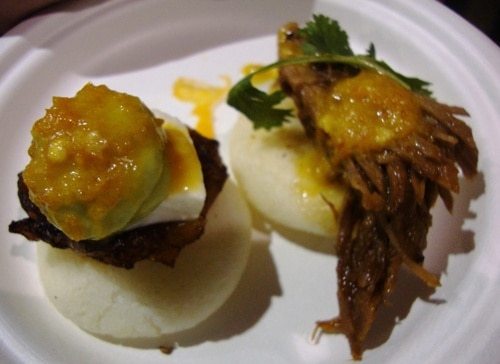 I was starting to get full, but still had a little room left.  I next stopped at the Caracas Arepas Bar table, which had 3 kinds of mini arepas.  It was pretty busy, and I ended up with one bbq beef & cheddar and one pulled pork shoulder.  They had nice sauces on top, and these were definitely among my favorite bites of the evening. 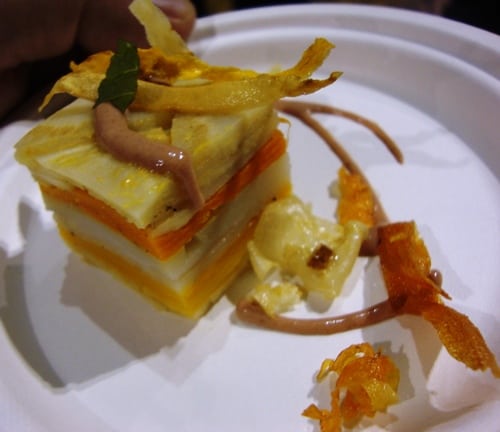 The next table to catch my eye had t-shirts hanging up that said “My Radish Isn’t Fat, It’s Big-Boned”.  I found out it was The Fat Radish, who are on the Lower East Side.

They had root vegetable stacks with date puree and vegetable crisps, which was one of the more colorful dishes here.  I’m not big on vegetables, but this was delicious, with a strong undercurrent of sweet potato, probably my favorite vegetable.  The Fat Radish is not a vegetarian restaurant, that’s just what they had for Choice Eats, and it was a good choice.

Well, that’s all I could fit into my belly last night. It was quite an enjoyable evening, and I also ran into a few people I know from the street food scene.

Kelvin Natural Slush was serving up an ice storm in the dessert area, but it was too crowded to get near, so I shouted a greeting to Alex and told him that I’d catch him another time.

As I was leaving, I ran into 3D from Korilla Korean BBQ, who were done serving for the night.  He was inside checking out the scene, and told me Korilla will have 2 more trucks on the street within the next 1-2 months.  He said the first one should be on the street by the end of April, with another one soon after.  Wow, 3 Korilla BBQ trucks on the NYC streets this summer!  That should make the lines much shorter.

Thanks again to Howard and the Wines That Rock team for the extra ticket to Choice Eats.  It was great!