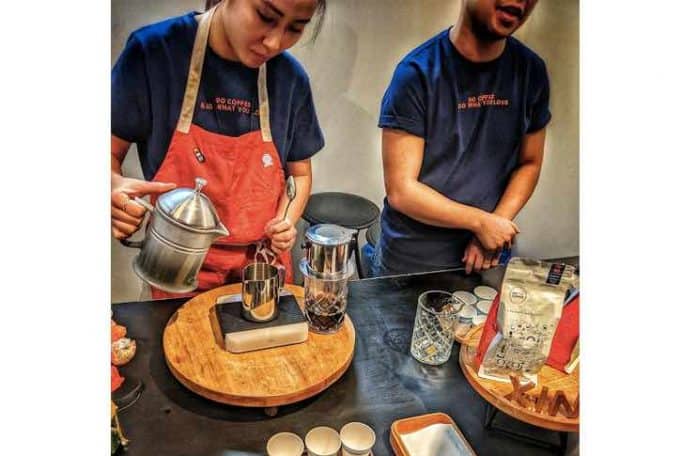 While the New York Coffee Festival floor is flooded with delicious brews of all varieties, the name of the festival is a misnomer. The Coffee Festival is about not just about getting caffeinated—although it is most definitely about that as I learned the hard way last year, jitters and all; instead, the Coffee festival caters to a variety of buzzes. This year I came to the festival fully prepared to drink A LOT of coffee and not much else but ended up leaving the festival with gourmet Swedish chocolate (from Svenska Kakaobolaget: kakaobolaget.se) and boutique local honey (from Bee Raw: beeraw.com) in my bag. While there were simply too many amazing vendors to talk about in one review, here were my highlights of the festival.

Last year I noticed there were several cafes and roasters from China that were getting a lot of attention for their attractive booths and delicious drinks. This year, the best cup I had was the Vietnamese coffee from Do Coffee. For those who have never had it, Vietnamese coffee is made by placing coarse dark roast grounds in a drip filet, adding hot water, then pouring the hot concoction in a glass full of ice and often (or for me, always) adding sweetened condensed milk. Because I love all things fatty and sweet this variety of coffee is tailored to me and anyone else who appreciates good things. The Baristas at the Do Coffee artfully brewed each cup paying special attention to precisely control the proportions of the ingredients and the temperature of the brew. The steady line at their modest-sized booth was a testament to how delicious each cup was. Currently, Do Coffee is looking for a U.S. Partner to distribute their amazing Vietnamese Coffee and if I can only find someone in my neighborhood that can them up on it.

Do you love Coffee so much that you want to be able to brew it literally anywhere where there is access to clean water? Yes? But you’re concerned though that such a device would be overly complicated, too bulky, and too difficult to clean? And also you are concerned that such a product would only be able to do either Hot OR cold brew AND it would look weird AND maybe your friends would make fun of you for carrying it around despite its incredibly practical function.

Fear no more, Palm Press is the solution to every single one of these issues. The device is sleek, simple, easy to clean, ridiculously portable (also easy to store) and makes both delicious hot and cold brew coffee. Sitting here now I’m actually kicking my self for not getting one. While I’m surrounded by delicious coffee places everywhere I go in NYC, I still could probably save a good chunk of money given by carrying this and some grounds around with me and brewing my own. Popular is the man who has the ability to brew anywhere. The Palmpress is a marvelous idea and a great gift for any coffee lover.

This one has to be given to both brewers because while each brew was superbly delicious, they were completely unlike each other in coffee terms. Sweet Leaf Rocket Fuel is a specially crafted cold brew, brewed with Chicory & Maple Syrup. Rocket Fuel is a seamless mixture of coffee bitterness and the pinnacle of all things sweet—Vermont maple syrup. I’d because of the sweetness, say Rocket Fuel is not an everyday cold brew but it is something I’d drink every day.

Meanwhile, Elemental Beverage Company’s Snapchilled cold brews tasted unlike any coffee I have ever before. Using their innovative snap chilling process –which chills drinks in 60 seconds, the cold brew was incredibly smooth, with the hints and nuances of each bean amplified while almost completely devoid of any of the bitterness found in other cold brews. The taste of each brew – I tried their San Alejo (peanut butter, maple syrup, and candied orange) and their Kolla Bolcha (watermelon, lavender and raw honey) was so shockingly different than I expected and incredibly pleasant. While the Massachusetts based company is looking for wider distribution, they also sell they are looking to sell sleek home snap chilling machines in the near future for those looking to get the most out of their favorite beans.

I was 100% surprised and delighted to see Oban Distillery at the 2019 Coffee Festival. I have been to the distillery in Scotland, and with its fruity, smooth-sweet finish, Oban is my scotch of choice. I like drinking Oban on the rocks and never have, and probably never would have, contemplated a mixed coffee/Oban cocktail. Luckily, someone did the imaginative work for me, and the result was a refreshing concoction mixing Oban 14, Cold Brew Coffee, Tonic Water, and an orange wedge. The mixture dubbed the “Oban Coffee” is perfect for either midday or pre-dinner cocktail. I would also recommend finishing it off with a glass of Oban Little Bay (their small-batch scotch aged in American Oak and European Oak Sherry casks) for good measure.

New Artisanal Food Fair Pops Up In Falchi at LIC