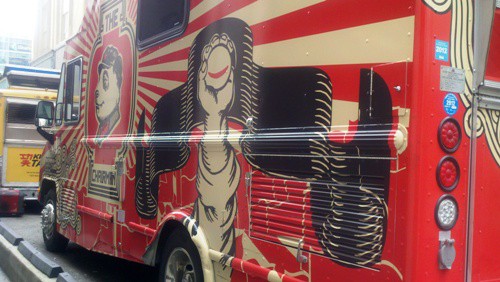 Where I’m working in San Francisco is quite a bit out of the way from most of the food trucks, but I did read about the Truck Stop, an alley off Mission St by 1st St where three trucks park every weekday.  I later found out why they crammed three food trucks into a narrow alley.

The Truck Stop was only about half a mile from where I was, and yesterday they had Chairman Bao, Curry Up Now & Kung Fu Tacos.

The woman in the truck told me they were best known for their pork belly bun, and I could see why.  Upon opening the container, the color was striking.  There were several pieces of pork belly with thin slices of turmeric pickled daikon on top.  The daikon was pickled, but not as strong as some of the other pickled daikon I’ve had.

Last night I went to a Thai restaurant with my colleague and he got a pork belly dish where more than half of it was fat.  This pork belly was very tender and barely fatty at all.  This was extremely delicious (or as Mitt Romney would say, severely delicious).

Next up was the spicy chicken, which was topped with pickled carrots, cucumbers and cilantro.  Similar to the daikon, the carrots were thinly sliced and not heavily pickled.

The boneless chicken had a mild sesame flavor, and a spicy kick that took a couple of bites to kick in.  Once it did, there was a pleasant amount of heat, but not enough to overpower the chicken.  This was a tasty bun too.

I really enjoyed lunch from Chairman Bao, and $7 was a good price for this quality of lunch.  They also had baked buns that were larger and cost in the $6-7 range,and you only needed one for lunch.

They even had a short explanation on the truck of What The Bao Is A Bun?  After reading it, I got the steamed buns.  That way I was able to try two different fillings – a very good decision.  You can follow Chairman Bao on twitter here.

The other thing I learned today was that SF has a very similar problem to NYC, in that trucks aren’t legally permitted to sell while parked on the street.  There are some ways around this such as food carts (which are allowed), a few food truck lots, and this alley off Mission St that is privately owned, where the owner lets food trucks park.

The Truck Stop alley was an interesting way around the legalities, but after lunch, I walked past an even more ingenious way to legally serve food from a truck – build a small structure around it.

I had already eaten lunch, but check out what I found on the corner of Beale St & Howard St – What’s Up Dog? – a (technically) indoor food truck.  Now that’s brilliant! 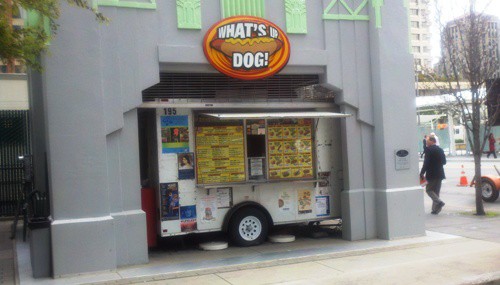 Nom Wah Tea Parlor: One of the Oldest Chinese Restaurants in NYC

The Best Hong Kong Foods and Drinks You Need to Try