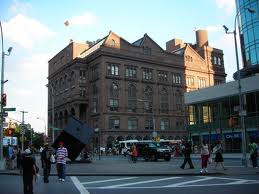 Last month Community Board 3 voted on a resolution against the city being able to place food vendors in the triangle between Third and Fourth Avenues when Astor Place and Cooper Square are re-developed next year.

The re-development plans are pretty far-ranging, with streets getting closed off and additional greenery being planted.

The concerns from the Board are that vendors in the space might take money away from local businesses, and there is a concern that late night food options in the area would attract too much attention at night.

“I have visions of Astor Place turning into the Meat Market,” committee member Carolyn Ratcliffe said, according to DNAinfo. “We want more public space, but we don’t want the area turning into a zoo.”

The Board is hoping that by making their opinion heard now—well before the construction begins—their chances of being listened to by the city will be greatly improved. [Gothamist]

Looks like some Community Boards are trying to stay ahead of street food’s burgeoning popularity. But we don’t know how having food vendors turns a neighborhood into “a zoo”.  Nobody goes to the Meatpacking District for the street food vendors!  Sounds more like a give to the local food businesses.