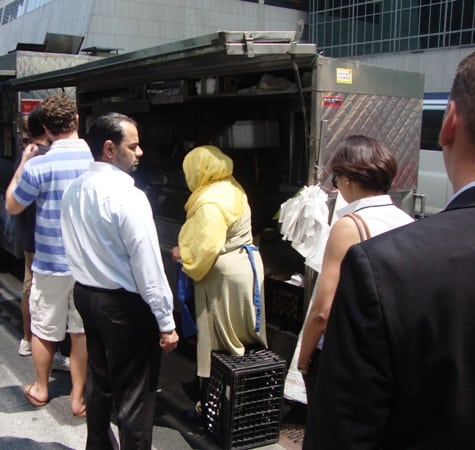 I stopped by 43rd St & 6th Ave to talk to Rosa, the Vendy finalist from El Rey Del Sabor.  She wasn’t there, but the trip was still worthwhile.

Right next door, I noticed the Trini-Paki Boys cart had fish, dumplings & sweet potato listed  as one of their Daily Specials.  I really like fish and don’t get it often at home, so I try to get it outside the house whenever possible – and Trini-Paki Boys is one of the fresher, more interesting carts around.

Today’s Lunch is the fish special ($7) from Trini-Paki Boys cart. 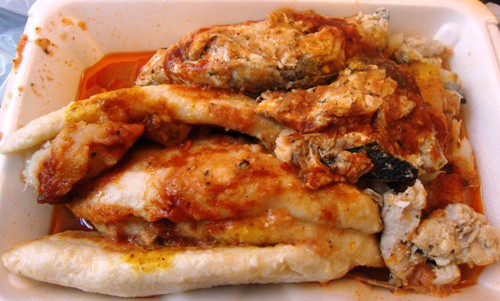 I won’t go into the name or background of the Trini-Paki Boys cart, but if you are not familiar with them and are curious, click here for some background.

Walking back from the cart, this was quite a heavy lunch to carry.  The dumplings and sweet potatoes are heavy starches, so I probably won’t be ready for dinner until about midnight tonight.

The fish was served on the bone with skin, so if you’re skittish about fish, this might not be the dish for you.  That said, the fish came off the bone easily and was tender and juicy.  I asked for some of their great tamarind sauce and also hot sauce.  Both added nicely to the flavor, as the fish had a pretty strong fish taste to it and stood up to the sauces.  The hot sauce had a nice zing in particular.

The dumplings were not the Asian kind, but more like German/Eastern European dumplings (i.e. solid and made out of flour).  They weren’t round though, they were banana-shaped, and there were 4 of them (!)   No wonder the lunch container was so heavy. 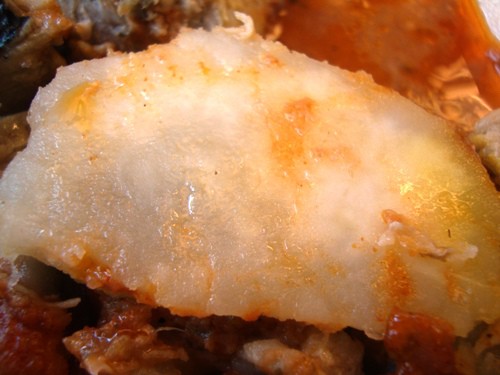 The sweet potatoes were awesome, probably because I love sweet potatoes and these were fresh.  They weren’t orange like canned sweet potatoes or yams – they were the color of regular potatoes – but they tasted like sweet potatoes.  Delicious – especially when dipped into all the sauces mixed around at the bottom of the container.

Today’s Lunch was a 7.5 out of 10.  The fish took a bit of work, but was ultimately tasty.  The dumplings were basically big pieces of dough, but the sweet potatoes were great.  I wouldn’t want to eat this lunch every day, but it was a nice change of pace from the usual street meat.  It got a bit messy with all the sauces, and probably didn’t leave my office smelling too great, but I enjoyed it.

Please note the fish & dumpling special is only available at the Trini-Paki Boys cart on Thursdays.

We Devoured This Delicious Sauteed Fish at Tariq’s #1 Halal Food...