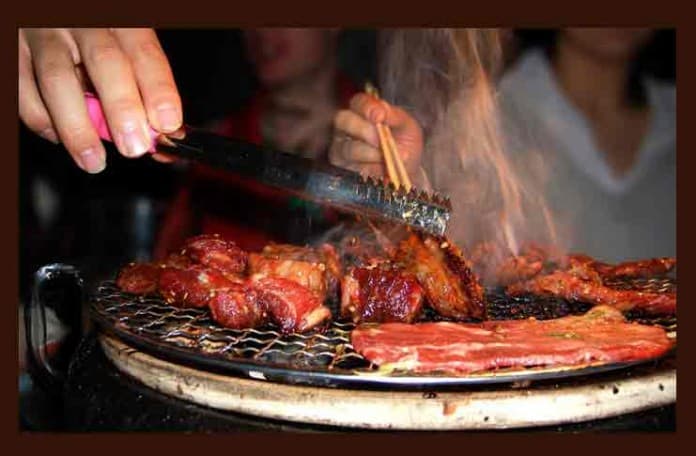 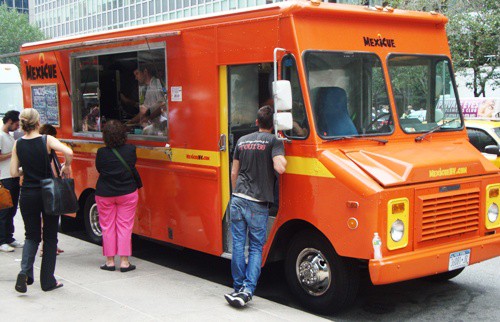 I’ve been wanting to try the new Mexicue truck that started serving Mexican BBQ around New York City last week, but had to go out of town for a family event.

The Food Randomist sent me a review that wasn’t very complimentary, but I reprinted it here last Friday for a few reasons:  I was out of town and couldn’t try the food, his review was detailed and he supported his opinions with specific examples, and the Mexicue Truck responded in the comments how they knew about some of the problems and were working to fix them.

I got back home Monday night, and had the opportunity to try the Mexicue Truck Wednesday for lunch.  The Food Randomist only gave them 1.5 stars, but they’ve had some time since then to fix things.  Would there be an improvement? 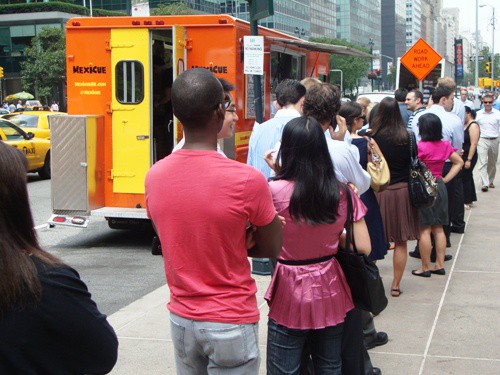 The truck was supposed to be in the Financial District, but they couldn’t find parking and ended up on Park Ave between 52nd & 53rd St.  I figured with the change of plans, the line might not be as long as the 45-60 minute wait reported earlier this week.  As I approached the truck, there were around 25 people on line, so I hopped on the end figuring 25-30 minutes.

I ended up in line talking with Andy from Wined & Dined, who was trying Mexicue for the 2nd time (and loved the 1st).  Talking about street food with Andy made the time fly, but by the time I picked up my order, it was 45 minutes later – a bit long to wait for lunch.  However, this should come down significantly once the pending permits are approved for 3 additional servers. 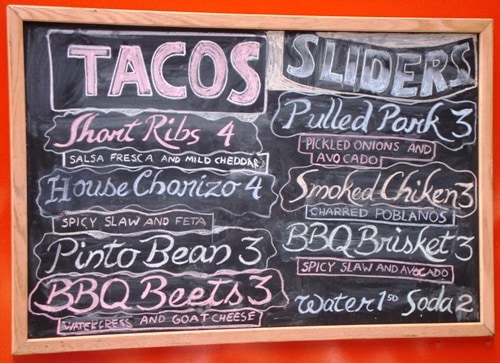 Everything on the menu looked interesting, and I went with the house chorizo taco ($4), smoked chicken slider ($3) and bbq beets taco ($3).  Since last week, the word I’ve heard is small portions but big taste.  Lets get to work on these babies and see!

The slider was a small bun, but the chicken overflowed into the container.  The chicken definitely had that smoky flavor but it was only a little spicy.  It was shredded and cooked just the right amount of time – not dry at all.

I know poblanos are mild peppers, but I didn’t really detect much flavor from them.  They added to the smokiness factor, but the taste was mainly smoked chicken (which was excellent).  There was a tiny amount of green tomatillo salsa on the slider, but it was pretty negligible.  The slider was 3 bites, with another small bite from the chicken that fell out of the bun.

Next up was the house chorizo taco.  They took the chorizo sausage out of its skin and cooked it loose like ground beef.  It was a little greasy on the taco, but not overly so.  The chorizo appears to be one of the things they corrected, because early reports were the chorizo was bland, but this was spicy with visible hot red pepper flakes on the meat.  I don’t know if they changed the chorizo or added hot pepper to the existing chorizo, but there’s no way anyone can call this not spicy, as several people did in the first few reviews.

The spicy slaw however didn’t really come through.  I got some red cabbage taste and texture, but would not call it “spicy slaw”.  The feta cheese was fine, as was the cilantro, but somehow this taco didn’t really come together for me.  They used only a single tortilla, which is usually a no-no in my book, but the taco did stay together until the end.  It didn’t fall apart, but came close.

The BBQ beets taco was last.  I don’t usually order beets, but the beet & feta salad is one of the better side dishes from Schnitzel & Things, and I’ve heard really good things about this BBQ beet taco too.  With BBQ sauce, how bad could it be?

Well, it turned out to be the best of the three dishes.  The beets were al dente (firm but not hard), the BBQ sauce was sweet and spicy, and the goat cheese was a very good counterpoint to the beets and BBQ sauce.  These ingredients all went together great.

In my opinion, the BBQ sauce was the star of the show.  Sweet and spicy is a wonderful combo, and I would love to see this BBQ sauce on pork. (Are you listening?)

Today’s Lunch get a 9 out of 10.  Mexicue has one of the most thought-out and interesting menus around, but the value quotient is on the lower end of the scale.  We don’t want them to sacrifice quality for price, but $10 for lunch that won’t keep me full until dinner is not going to be a regular part of my lunch plans.  The BBQ beet taco was excellent, the smoked chicken slider was good, but the chorizo taco didn’t do it for me – and I usually love chorizo.

One thing the Mexicue truck seems to do is listen, so let’s give them a few weeks to sort things out.  They are definitely unique, and I have the feeling they are going to be around for quite some time for all of us to enjoy.