UPDATE TO ORIGINAL POST: After spending the afternoon with Today’s Lunch last Friday, I’m not going to add Sara Halal Food Cart to the NYSF directory or map.  The roof of my mouth had a film on it for most of the day, and I wasn’t crazy about the way the food sat in my stomach throughout the afternoon.

New York Street Food is about finding the BEST street food in New York.  While the lunch from Sara Halal Food Cart was ok, it was not of the quality where I would recommend it over other food carts.  Lunch needs to be a cut above what is found on most street corners for it to be recommended by New York Street Food. 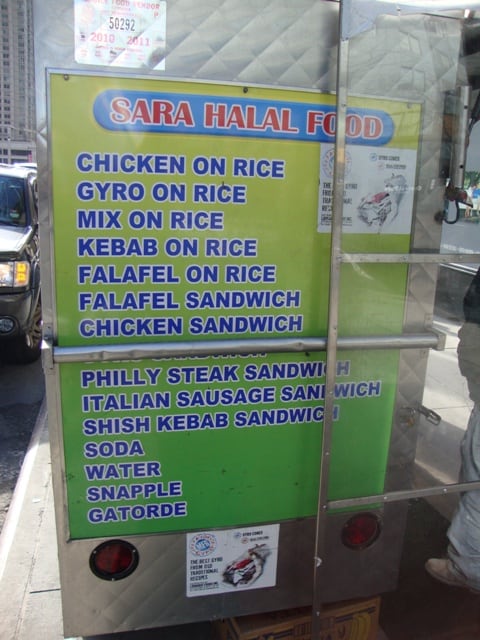 ORIGINAL POST: For Today’s Lunch, it was 20 degrees, so I went to the closest street food cart to my office, on the SW corner of West 57th St and 8th Ave, in front of the Hearst Building.  I’ve noticed this cart lately, called Sara Halal Food, because it’s a relative newcomer to the neighborhood and smelled great when I walked by several times over the past few weeks.  There were usually a few people standing around waiting for food, so today I decided to give it a whirl.

I don’t usually go for the chopped chicken at these carts because I’ve had not-so-great experiences with it, so I asked for the gyro platter because I saw the spit of gyro meat in the corner of the cart.  When they were cutting the meat off the spit, I noticed whole pieces of boneless chicken on the grill with an orange-ish rub on it, and he was chopping the chicken up right there.  When I saw that, I changed my order to the chicken and gyro platter combo. 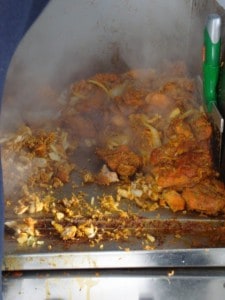 The chicken was a combination of white and dark meat, but since it was chopped right in front of me, it was recognizable as chicken and pretty tasty.  The white sauce was mayonnaise-y instead of yogurt-y (if those are even words) and nothing special, but the hot sauce was actually hot.  That’s not always the case at these carts. 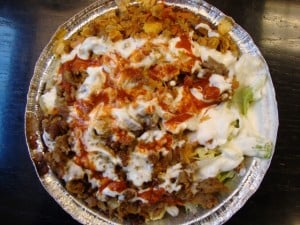 The lamb gyro was the expected gyro meat, and with the hot sauce, was enjoyable, too.  I preferred the chicken, but both were decent.

The rice was ok.  Not overcooked, but a little bland.  Scooped up with meat and sauce, it was fine, but by itself it was fairly tasteless.  The salad was fresh lettuce and a little tomato, with the white sauce pulling double-duty as the salad dressing, which was not a great idea.  I’d prefer a basic Italian dressing (really any other dressing) to the white sauce on my salad.

To summarize Today’s Lunch, the chicken, lamb gyro and hot sauce were good, the rice was ok, and I would pass on the white sauce next time.  However, a chicken and lamb gyro combo for only $5 is not a bad deal.  I want to try either a chicken or falafel sandwich next time before passing judgement.

If anyone else had lunch at Sara Halal Food Cart on 57th St and 8th Ave, please give us your thoughts in the Comments.