Home Street Food STREET VENDORS MAY GET LETTER GRADES TOO 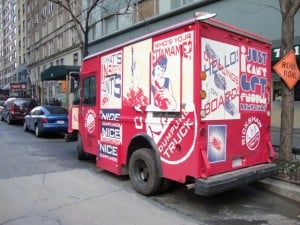 We’re sure you heard about the new law that will make restaurants post letter grades based on their Dept of Health inspection (A=good, B=ok, but could be better and C=fail).

City Council member Dan Garodnick has introduced legislation that would make street vendors subject to the same law.  On his website, Garodnick says, “Whether it’s a falafel, a taco — or even a hot dog — consumers deserve to know that the food that they are eating has been prepared and handled properly, no matter where they buy it.”

Though the legislation was introduced a year ago, Garodnick believes it has a good chance of passing now because of the new DOH rules. He told Our Town, “There are, obviously, parallels between food handling and service in restaurants and that which is done from a cart.”

However, critics say harsh health inspectors could hurt vendor sales. The Urban Justice Center’s Street Vendor Project works to protect vendor’s rights, and believes this would just add to the list of minor infractions vendors frequently get fined for.  SVP director Sean Basinski told us, “We are not opposed to the principle of having more information for our customers.  It is the execution by the Health Department that we don’t trust.” [Gothamist]

In our opinion, the more information, the better.  When we were in L.A. a few years ago, we loved the idea of grades in restaurant windows, and were hoping it would move East.  In L.A there was something like a 60% decrease in food-related illnesses after implementation of the grading system.

We’re all for this law being applied to street food vendors, as long as the rules are implemented fairly, and it’s not used as an excuse to write tickets and raise revenue from (mostly immigrant) street vendors.