One of Gourmet Magazine’s final articles before going under was Eight Great Street Food Vendors In New York City.  They included some of the usual suspects, such as Hallo Berlin (mmm…wursts), Big Gay Ice Cream Truck and The King of Falafel & Shawarma.

Big Gay Ice Cream Truck and The King of Falafel & Shawarma were both Finalists in the 2009 Vendy Awards, which I attended and wrote about here, and Hallo Berlin won the very first Vendy Award back in 2005.

Sadly, Rolf Babiel, founder of Hallo Berlin passed away shortly after this article was published.  Midtown Lunch had a nice tribute to Rolf.  His brother Wolfgang took over the business, and Hallo Berlin Express, their third location, just opened.  Glad to see such great quality street food will continue.

Some of Gourmet’s more unexpected choices were the El Peluche truck in Washington Heights, BBQ Kebabs in Chinatown and the Red Hook Lobster Pound.

I subscribed to Gourmet for many years, and always enjoyed their travel articles much more than their recipes and cooking articles.  This is another example of why. [Gourmet] 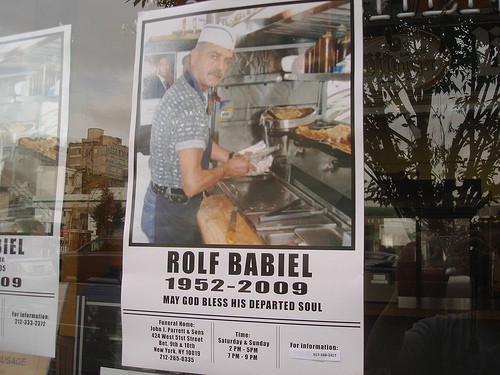