If you read New York Street Food, you have probably heard about Cake & Shake, a cupcake and milkshake cart that had 2 carts, one in Washington Square Park and one outside the Metropolitan Museum of Art.  They closed the Wash Sq Park cart this year, but still have one outside the Met.

Now a new cart has appeared on West 53rd St & 6th Ave selling cupcakes and milkshakes under the name Cake vs. Shake, according to an article in DNAInfo.

“We have some imposters,” Derek Hunt, one of the owners of Cake & Shake told DNAInfo.  Hunt said he first realized something was off when he began receiving calls from customers asking if he’d moved.

This is a similar refrain I heard from Yassir Zraouli, owner of Bistro Truck, when Marrakech Chefs first appeared on the scene a couple of months ago.  Yassir told me “they basically copied my menu”.
As I told Yassir, who was a Vendy Award Finalist in 2010, “when you’re number one, people will copy you. It sucks, but it’s better than being number two.”
The main difference between the originals and the copies is the quality.  Yassir’s serves top-notch food with quality ingredients, and his daily specials are always excellent  I haven’t tried Marrakech Chefs yet, but word on the street is not good at all.

As for Cake & Shake, all of their products are made using organic sugar, milk, eggs and flour. The company also uses bio-diesel to run its van, solar power for lights and only biodegradable, compostable or recyclable containers.

None of these are true of Cake vs. Shake.

While Hunt said he was upset at first by the blatant rip-off (as was Yassir), he says he’s trying to view the mimicry as flattery.

We also heard about Milk Burger, a restaurant in Harlem that blatantly copied Shake Shack’s menu.  That reminds us of John Amos’ McDonalds ripoff called McDowell’s in the Eddie Murphy movie Coming To America. 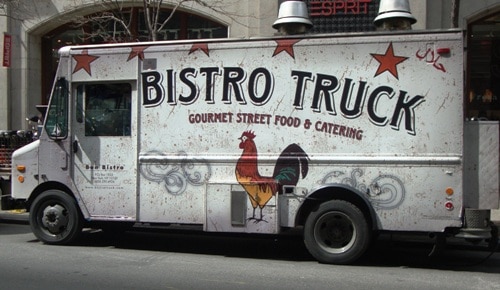