Home Pizza Can New York Pizza Get Even Better? 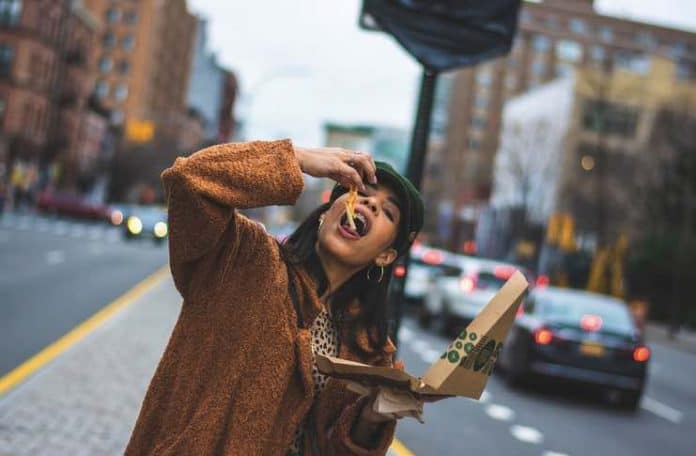 It’s a known fact that Italy has invented the best pizza in the world, but it’s another fact that New York has perfected it and has taken it to a whole other level. If you live in New York, or even went for a visit, there’s no denying that you grabbed one of these delicious slices as a nighttime snack. But what makes it so special? We attempt to get to the bottom of this with the following theories.

Needless to say, pizzerias in New York City always use fresh ingredients, and they make everything from scratch. The dough is made with water, sugar, and olive oil, which is different than a Neapolitan pizza.

The sauce is more than crushed tomatoes and salt, but a mix of other flavors like garlic, sugar, salt, basil or oregano, and red pepper. And let’s not forget everyone’s favorite ingredient: low-moisture mozzarella. It’s grated on top to create the perfect cheesy delight; many eyes for that Instagram-worthy cheese-pull. Most Neapolitan pizzas will simply place fresh slices along with arugula and other ingredients.

Many other high-quality and fresh ingredients can be added according to what your taste buds delight in. Whether it’s vegetables, sausages, pepperoni, or a mixture of other cheese, you’ll definitely find a tasty slice worthy of your consumption!

Many food scientists believe that it’s mainly great because of the correct cooking method and using high-quality ingredients. Getting high-quality cheese as well as spending some time making the ideal sauce is a definite contribution to the richness of flavors New York pizza has to offer.

The way the pizza is tossed in the air means the air in the pizzeria will contribute to the flavors, not to mention that stretching the dough and not rolling it also helps preserve the structure of the bubbles in the dough.

The technique can be taught easily if you’re a true pizza aficionado and wish to replicate a New York-style pizza. You can opt for making your own real artisan pizza by looking for online guides on the best techniques regarding the dough, the oven, and the ingredients that you will need. Pizza-making is an art, and understanding everything there is to make it will be the best skill you can achieve.

It’s in the Water

One of the greatest myths regarding the uniqueness of a New York Pizza is that it’s made with their tap water. This is one of the oldest theories that claim water is one of the reasons as to why it tastes so great. Food scientists claim that due to the minerals and fluoride added to the water, it actually contributes to the chemical reactions in the pizza dough. Whether it’s a myth or fact, there’s no denying that many believe New York has the best water, and so, it dramatically affects its pizza-making process as well.

Pizza makers in New York use deck ovens that are extremely old, and they cook it at high temperatures. The theory here is that, just like a cast-iron, these types of ovens absorb decades of cheese and sauce vapor into its walls and release it back to new pizzas along with the burned wood or coal aroma, thus creating a world of flavors. New pizza hubs might face this issue if they’re using new ovens, and going to a decades-old spot is way better.

The New York pizza crust is famous for how thick it is by the edges, and how thin it gets towards the middle. It’s also known for offering the best crisp with every bite; not too chewy and doughy, but not too crispy either, it’s just right! The slices are large, wide, flat, and can be eaten by folding. An average pie would be about 18-24 inches.

One popular reason why the pizza joints in New York are great is how most of them are run by a family business. They aim at providing you with a more personal, homey atmosphere that you won’t find at most restaurants. You might even feel that they’re your long-lost family!

Admit it, how many times did you crave a late-night pizza, but found that almost all the pizza places were closed? That’s the beauty of pizza joints in New York City; they’re easily accessible, and open till midnight or even after! Thus giving you time for indulging when you’re attacked by the midnight munchies!

The story of a New York-Style pizza is the stuff of legends; there’s no definitive answer as to why New York pizza is the best in the world. Many doubt that it can get better because it’s perfect the way it is, whether it’s the technique, the ingredients, the characteristics, or even the water! No matter what the reason is, it’s undeniable that many flocks to pizzerias to indulge in a slice of heaven!

10 Reasons Why Gluten-Free Pizza Is Better

The Best New York Style Pizza: Where to Find It in the Big Apple

All You Need to Know About Pizza Ovens