There has been a lot of activity around the Vendy Awards this week, and one of the items on their website is an interview they did with Thomas DeGeest, owner and founder of Wafels & Dinges, since there’s a new Wafels and Dinges Store.

If you recall, W&D won Best Dessert at the 2009 Vendy Awards, which was the first Vendy Awards we attended. we caught Thomas raising his waffle irons in victory.

While there were a bunch of interesting things discussed, two items got our attention over everything else.

First of all, Thomas reveals that W&D will be opening a new Wafels and Dinges Store downtown in the near future. He isn’t specific about the address, but did say it will be downtown.

The second thing is W&D will be giving tours of their manufacturing facility in Gowanus, Brooklyn in about a month or so. Not only will you be able to learn all about wafels, but you will also be able to participate in the dough-making process, and learn some some wafel history at the same time.

You can read the entire interview on the Vendy’s blog. 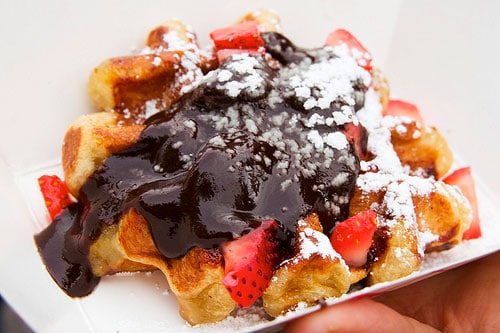