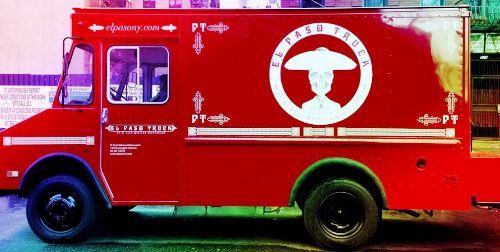 About 2 months ago, we ran into Ben Goldberg on the street. You might remember Ben, who previously ran The Frying Dutchmen, and he told us about a new taco truck coming out soon called El Paso. He confidentially sent us a copy of the menu, but asked us to keep it under wraps until the truck was ready to roll…and it looked awesome!

Last Thursday the truck made it’s debut on 72nd & York, near some hospitals, but away from the craziness of midtown or downtown. Smart strategy. Too many trucks think they can handle the crush of midtown right away, only to end up with people waiting 30-45 minutes for lunch.

We couldn’t make it the 1st day, but did on Friday, their 2nd day at the same spot.

You can tell from the menu they are going for something a cut above the regular taco truck. When was the last time you saw mahi mahi al pastor or pulpo (octopus) served on a NYC taco truck? That’s right…never!

This taco truck is affiliated with El Paso Restaurante, located at 1643 Lexington Ave (103rd St). The menu at the truck is significantly smaller than the restaurant, with just tacos and some drinks – but what they do with the tacos is excellent!

We were disappointed there were no octopus tacos available when we arrived, but hopefully that will change next time.

We started with the short rib taco ($4), which had two things that immediately caught our eye in the description.

The other thing was watermelon pico de gallo. Those red chunks in the taco are not tomatoes, they’re watermelon, with red onion and cilantro finishing out the pico de gallo.

Short ribs and watermelon pico de gallo are well and good, but they need a sauce to bring it all together. The chipotle BBQ sauce was a great choice. It was sweet and smoky, with some heat, but not too much.

The only problem we had with the short rib taco was that it was served on only 1 tortilla. With all the fillings, sauce and juice, we couldn’t even get 1 bite to our mouth without it breaking through the tortilla and falling into the plate.

We ate at the truck, so it was easy to go back to the window to get a fork. Once we did, it was as delicious as it sounded, with extremely tender beef, a rich BBQ sauce, sweet juicy watermelon, and a little bite from the red onions.

The mahi mahi took longer to cook than the other tacos, so we ate the pollo pibil taco ($3) while the mahi mahi taco was still being made.

In our experience, chicken tacos are often dull and boring, but the habanero sauce gave it some life, and the pickled onions on top added a sharp, vinegary dimension.

The pollo pibil taco wasn’t as over-the-top great as the short rib taco, but it was one of the best chicken tacos we’ve had in a long time.

With the pollo pibil taco, we were able to get in one bite before it fell through the only, lonely, broken-hearted tortilla. Make sure you get a fork before leaving the truck. It saved our ass twice.

There were 2 pieces of grilled fish in the taco, topped with red onions, cilantro and guajillo sauce.

Surprisingly, the guajillo sauce made this taco the spiciest one of the bunch. We didn’t expect the spiciest sauce to be on the fish taco.

What could have helped temper the heat was more pineapple. One of the hallmarks of “al pastor” is pineapple, but it was sadly non-existent.

We’re not saying there was none, but the taste of pineapple did not come through, and it would have rounded out the guajillo sauce nicely.

After finishing our lunch, we spoke with Rodrigo, who was running the truck. We told him about our difficulties with only 1 tortilla on the tacos, and he said it was noted. It sounded like they were going to use 2 tortillas per taco going forward, but we’ll have to see.

We also told Rodrigo how delicious everything was, and asked where they will be parking in the future. 72nd & York is a major pain for us to get to. He said they were thinking about the Meatpacking District for nights or weekends, but other than that, they were playing it by ear.

Our suggestion is to follow the El Paso taco Truck on twitter here or on our Mobile Munchies twitter feed. If they park anywhere near you, get your butt over there for a great meal. Once they get to midtown, we expect the El Paso Truck to be mobbed.

Cheesesteak With “The Works” from Carl’s Steaks