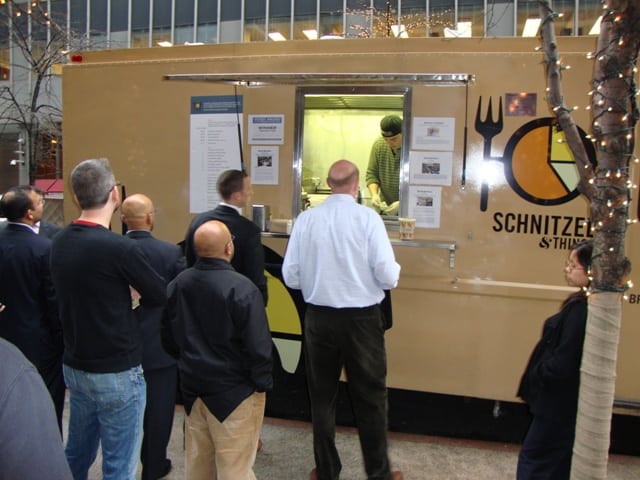 For the latest New York Street Food Featured Vendor Profile, we are happy to present the Schnitzel & Things (S&T) truck.  Schnitzel is one of our all-time favorite foods, so this was an assignment near and dear to our hearts.  The following was our interview with Oleg, co-founder of Schnitzel & Things:

NYSF:  Hi Oleg.  Thank you for taking the time to speak with us. It’s been a heckuva year for S&T.  When did you start the business?

NYSF:  Are you originally from New York?

Oleg:  I was born in the Ukraine, but my family moved to New York when I was 6, so I’ve been a New Yorker most of my life.

NYSF:  How and when did you decide to start a schnitzel truck?  Do you have a food background?

Oleg:  I attended the French Culinary Institute about 7 years ago, then decided to go back to college for business.  After I got my business degree, I couldn’t really find a job that I wanted, so I took an internship with an investment bank in Vienna.  I spent a year in Vienna, but after a year, I was laid off.  I came back to New York, and that’s when my friend and I thought of the idea of a food truck that served schnitzel.

NYSF: After you came up with the idea, was it difficult to find a truck?

Oleg:  No.  We did some research and found a Canadian truck that was for sale in Pennsylvania.

NYSF:  The response to S&T has been very positive, but it couldn’t have all been so easy.  Did you have any setbacks along the way?

Oleg:  There is always the possibility of conflicts with other street food vendors, which we’ve had our share of.  The truck has also been known to break down on occasion, and in November, there was a small fire on the truck, but it wasn’t nearly as bad as originally reported.

NYSF:  You seem to try out new menu items on a regular basis.  What are some of your more popular items, and what new items didn’t work out so well?

Oleg:  The veal schnitzel is very popular, and for a new item, the schnitz-burger has caught on.  It’s very challenging to come up with new menu items because the only cooking apparatus we have are deep fryers.  One day our fishmonger did not have cod, so we tried skate.  It was ok, but everyone preferred the cod.

One thing that did not work out so well was spaetzle.  It was very hard to execute because you can’t deep-fry spaetzle.  It wasn’t worth the trouble. (NYSF note: spaetzle is made by putting batter into boiling water to create the spaetzle, which is then fried with butter, herbs and whatever else you want, such as onions or garlic.)

NYSF: How did the T-Mobile commercial come about?  Has anything else come out of the commercial for you?

Oleg:  We got a call from T-Mobile, who said they were interested in putting a food truck in one of their ads.  They told us that we were among the finalists.  I called them to try to get the ad, and we did end up getting the T-Mobile commercial.  While the ad was on TV a lot, especially during the World Series, nothing else really came out of it, although we might be in a book about food trucks.  We need to set up a time with them to take some pictures. (NYSF note: Sounds like it could be Truck Food Nation, which we recently wrote about here.)

NYSF:  You won the 2009 Vendy Award for Rookie of the Year.  What are your plans for the future?

Oleg: We just want to continue putting out the best food we can for our customers.  We hope to be nominated in the main category of next year’s Vendy Awards, and would love to win.  We may expand to a 2nd truck or eventually a storefront, but for now, we’re concentrating on this truck and making the best food we can.

NYSF:  Thank you for taking the time to speak with us.  It was good talking with you.