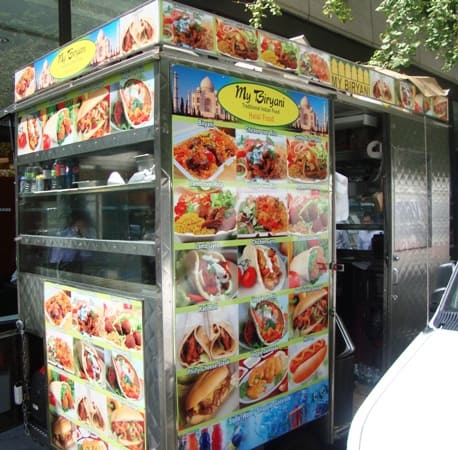 I wasn’t sure what to have for lunch today, so I strolled up 6th Ave in the 40’s to see if there was anything new on the scene.  On 44th St just west of 6th Ave was My Biryani cart, which I’ve been to a couple of times before, and next to them was a new cart called Royal Grill that had a few people in line and looked tempting.

I almost went to the new Royal Grill cart, but then I saw a sign on My Biryani cart that simply said “Fish Rice $6.99”.  You don’t see fish on too may carts, and I was intrigued by the vagueness of the handwritten sign.  Nothing like livin’ on the edge every now and then.

When I ordered the fish, I wasn’t sure what to expect.  Usually fish at a street cart is a defrosted frozen fillet of a white fish – but this guy took out a nice-sized salmon fillet from a bag in a cooler.  The salmon looked like it had been marinated in herbs and oil.

He put the salmon fillet on the grill, then drizzled on a little more oil and covered it with some tin foil to keep in the moisture.  After a few minutes he flipped the fillet over, then put it over basmati rice and asked what sauces I wanted.

I saw he had a green sauce in addition to the standard white and hot sauces.  I asked what it was, and was told it was a medium spicy sauce.  I didn’t want to kill the salmon with red hot sauce, so I asked for white sauce and green sauce, which he followed with a liberal dose of seasoned salt from a shaker.  He also put some grilled onions on the side of the fillet, as well as lettuce and tomato.  I know the tomato was fresh because he sliced it in front of me. 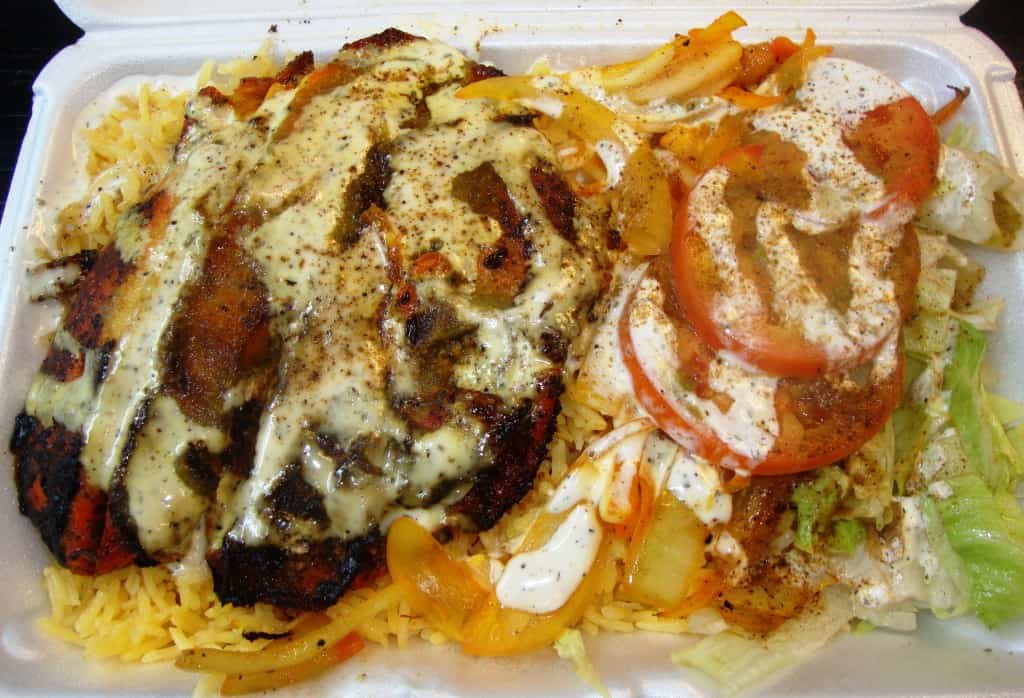 The salmon was a little well done from the grill, with a decent amount of charring, but it wasn’t dried out.  The salmon was pretty good, with a medium heat from the green sauce and a little mayonaissey sweetness from the white sauce.

The basmati rice was very good – light with some cloves in the rice.

Today’s Lunch from My Biryani cart had potential.  The salmon fillet was marinated well and a decent size for $7, but it was a little overcooked, and the seasoned salt detracted from the fish rather than added to it.  If you like salty food, you might not notice, but I’m pretty sensitive to salt.

I did order fish from a mid-level street cart and survived…in fact I would order it again, as long he left off the seasoned salt.

What A Kati Roll At Bhabi Halal Food