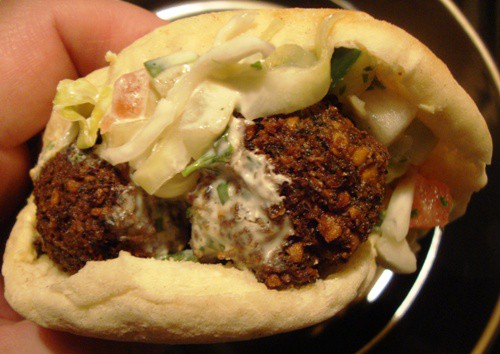 Interesting article in The Brooklyn Bureau about the friction between street food vendors and brick-and-mortar restaurants in Bay Ridge.

Javaid Syed, who owns franchises of 22 Burger King and Popeyes locations throughout the city, is complaining that two falafel carts nearby account for most of a 30% drop in revenues at one of his stores.

Really? We find that pretty hard to believe. If that’s the case, BK should start serving falafel.

Maybe people are finally realizing that street food is freshly cooked right in front of you, and that fast food is mostly processed garbage.  Even the elimination of pink slime from the menu is not enough to bring some people back to fast food restaurants.

The article does make a good point that Bay Ridge merchants pay additional fees to the area’s two business improvement districts, or BIDs, for supplemental sanitation services, streetscape enhancements and marketing efforts—a cost of doing business that food carts don’t share, according to Patrick Condren, executive director of the 86th Street and Fifth Avenue BIDs.  We agree that street carts should share in these types of expenses that benefit the entire neighborhood.

Syed and other local merchants contrast their rents and other costs with the license and permit fees paid by food cart vendors.  But they totally discount significant commissary costs incurred by street vendors to clean, stock and park their carts every night.

David Weber, president of the New York City Food Truck Association, put firth a vigorous defense of the street vendor business model, with “rent taking the form of costs at a Department of Health-approved commissary — which mobile food operators in Bay Ridge peg at $1,000 a month.

Weber also pointed out that: “A food truck never does the revenue that a restaurant does.”  Nor are they exempt from related costs, such as disability insurance and workers’ compensation, he added.

“A food truck is great when it’s a sunny day and it’s convenient for people to grab something on the go. On a rainy day, it’s not so great.” said Weber.

Weber argued that food trucks and brick-and-mortar restaurants serve different customer needs and compete fairly under existing rules, and that “I don’t think it’s the place for a municipality to intervene and regulate competition between these different business models.”

RED HOOK VENDORS ENDING THEIR SEASON WITH A HALLOWEEN PARTY