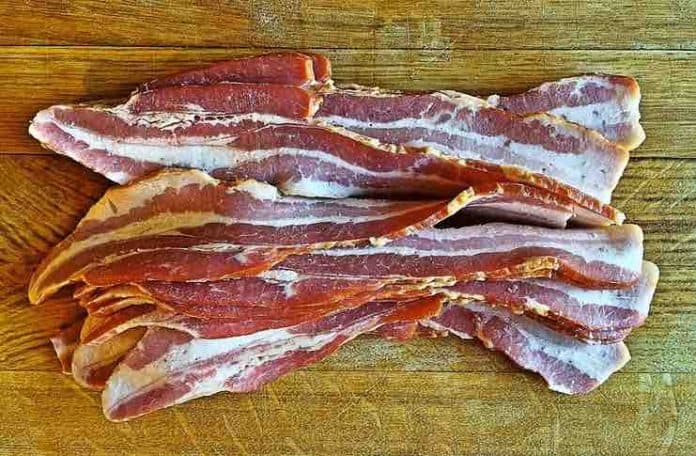 Bacon is a food phenomenon and everyone (vegans and vegetarians notwithstanding!) knows that the meaty snack is simply irresistible. These days, bacon can be found absolutely everywhere including ice cream, cupcakes, coffee and even chewing gum. Since Bacon Mania first exploded, it has gone from being a simple ingredient to becoming a cultural obsession. You have probably heard the phrase, “Everything’s better with bacon”. For all the bacon lovers out there, here are 11 interesting facts about bacon that you’ll be surprised to know.

1. It Makes a Great Gift

Everybody loves receiving food as a gift because once you have unwrapped it, you get to eat it. The experts from Manly Man Co explain that bacon gifts are absolutely perfect for any meat lover! There are so many people who are difficult to buy for, but with a special bacon hamper or a “bacon bouquet” you will put a smile on the face of every bacon fan in your life. Bacon truly is the gift that keeps on giving!

2. Bacon Was First Discovered More Than 3000 Years Ago

As surprising as it is, the Chinese are widely acknowledged to be the first to cook salted pork bellies in 1500 BCE. This makes bacon one of the first processed meats ever, and thankfully the process was taken up by almost every culture since then.

3. The First Bacon Processing Factory Was Opened in 1770

For years, farmers and butchers produced bacon for local use within their communities. In the 18th century, John Harris decided to open the first-ever bacon factory in Wiltshire with his “Wiltshire Cure” method. Nowadays, people still use this method to add the finishing touches to bacon to create a less salty and sweeter taste.

4. Bacon Is Known by Different Names

Bacon has its roots in China, became popular among the Romans, and spread across the globe. Bacon has been called different things in different countries. For instance, in the Middle Ages, the Germans called bacon “bak” while the Franks referred to bacon as “bakko”. The Roman name for bacon was Petaso and they often paired it with wine. Sounds perfect to us!

5. Bacon Literally Translates to the “Back of a Pig”

As mentioned above, the Germanic tribes used to call bacon “bak”. The root of the word “bak” refers to the pig’s back. In earlier times, bacon or “bacoun” became commonly used in the English language to refer to any pork product around the 12th century. However, from the 14th century onwards, bacon or “bacoun” referred to specifically cured meat.

6. Bacon Can Be Used To Make Explosives

This is definitely one of the most fascinating facts about bacon. During World War 2, households were asked to donate bacon grease from leftovers as rendered fats can be used to create glycerin, which can be turned into gunpowder, bombs, and other munitions. Tasty and deadly!

7. Bacon Comes In Many Different Forms

Every country has its own opinion about what is the best bacon. In the United States, it is all about pork belly bacon, in the United Kingdom, people prefer ham and shoulder, whilst in Canada, the bacon generally comes from the loin. Let’s not argue about who is right or wrong. Everyone knows that all bacon is delicious!

8. There Is a National Day for Bacon

Bacon is widely celebrated every year by Americans on the 30th of December. Clearly, there is meat and there is bacon. It may not be as important as Christmas or New Year’s Eve, but Bacon Day is still one of our favorite holidays.

This is my favorite of all facts about bacon. Unfortunately, most research focuses on the negative health impacts of bacon. However, there is also research that has found positive links between bacon consumption and health. For example, in a study conducted by the University of North Carolina, researchers found a micronutrient in bacon called choline, which is a key nutrient for healthy brain development in babies.

Pork production has a significantly smaller carbon footprint than that of beef. In a recent study, it is estimated that beef production requires 28 times more land and 11 times more water than is required to produce pork.

11. Bacon Has Fewer Calories than Soda

There are an average of three slices of bacon in every serving and each serving contains around 7.5 grams of protein and 120 calories. Meanwhile, a 12-ounce can of soda drink will typically contain roughly 150 calories and zero grams of protein. It is basically a superfood!

Will These Facts About Bacon Make You Eat More or Less Of It?

Whether you love to add bacon to your breakfast or on top of a juicy burger, everything’s better with bacon. From fast-food chains to fine dining, bacon truly has taken the world by storm! With so many fantastic bacon products available, it is a wonderful time to be alive!

Looking for a great place to enjoy bacon in NYC? Read our review of Jack’s Meat House.

The Top 5 Tastiest Cuts of Beef to Cook in an...