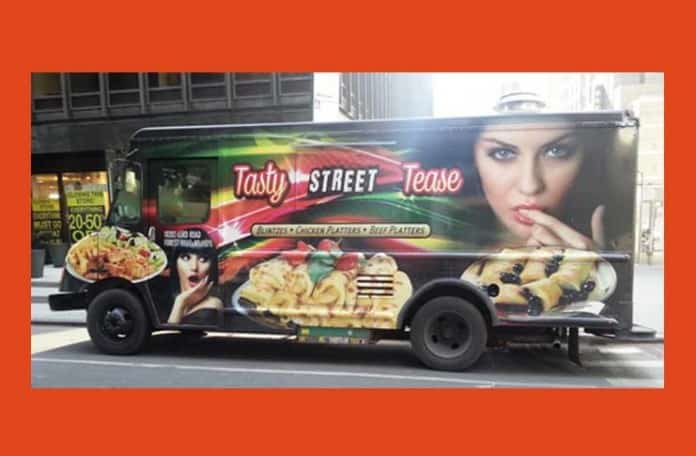 We were out looking for lunch last week, when we spotted a new food truck. At first we thought it could be a promotion for the Hustler Club.

The truck is called Street Tease, and parked on the SE corner of 54th St & Broadway. It looked like they were trying to seduce you into buying their food. Men, at least. We doubt women will try a food truck because there’s a photo of a hot woman on the side. Guys can be pretty dumb that way, and I say that as a male of the species.

Of course we had to try it, because that’s what we do!

The menu was your basic street meat platters, with “lamb”, chicken or combo platters over rice.

We weren’t in the mood for street meat, so we decided to get crepes/blintzes (they were called by both names on the truck). There were about half a dozen varieties, and cost $2 each or 3 for $5.

The crepes were filled with various items, and we got apple, cherry and blueberry cheese. Crepes is kind of misleading, because they didn’t cook it right there on the truck, so let’s call them blintzes.

They topped the blintzes with a chopped apple compote and chocolate syrup.

The blintzes were slightly warmed though, which made them much more palatable. Cold blintzes would have been a disaster.

Nothing amazing, but a few blintzes for lussert (i.e. dessert for lunch) were fine. They didn’t exactly fill us up, so we picked up a nice cup of clam chowder from Big Red on the way back to the office.

The Street Tease vendor told us that he hopes to have fish and maybe shrimp in the next week or so. It will likely be frozen, not fresh, but do any food trucks serve fresh fish? Not since Fishing Shrimp went out of business.

So, Can Sex Sell Food? We would say probably not.

In our opinion, food is for after sex, not before.